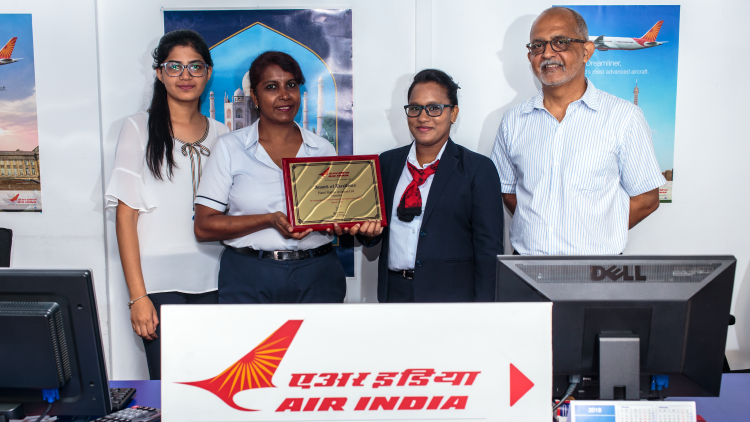 Hardly a year goes by without Harel Mallac Aviation receiving an award. As the local representative of Air India and Condor, the German airline, this member of Harel Mallac Group often stands out and receives recognition from both carriers for its excellent level of service. On the left: Condor, on the right: Air India. The colours of these two carriers are proudly displayed in the entrance of Harel Mallac Aviation, and set the tone for what we discover in the back office. The walls there are covered with awards, trophies and prizes collected over the years. In 2017 alone, Harel Mallac Aviation was rewarded by Condor for “Best Upgrade Sales Performance (long-haul) Destination” and received an “Award of Excellence” from Air India for continued support during the year.  The first award is pretty self-explanatory; the team sold the most flight upgrades at the airport during this year. As for the second one, Cassim Hansrod, GSA Manager for Harel Mallac Aviation and Station Manager for Condor, explains that the company was rewarded by Air India for having gone above and beyond this past year. “To be the sole representatives of those two carriers here in Mauritius is a pride and a responsibility. It has brought us to give our very the best over the years, to always be very professional”, says Cassim Hansrod.  This professional approach, be it at the ticketing counter or at the airport, is mainly backed by a dedicated team working for both GSAs.

If the partnership with Air India is fairly recent – it started in 2014 -, the one with Condor is quite a long-lasting one. When, in 1992, Condor decides to come to Mauritius with its own aircraft to offer flights from and to Germany, Harel Mallac Aviation partners with the airline.

This operation started with two weekly flights from Frankfurt and Munich and gradually increased to reach five to six flights a week from the German cities. Over a short period of time, Condor even operated a daily flight. When asked if the number of passengers increased alongside the number of flights, Cassim explains that “it is difficult to evaluate the support of Condor on the local market due to the fact that new airlines are also operating from Germany”. However, one sure thing is that “Condor has always been satisfied with its load factor on the Mauritian Market, which is also considered as its Prime destination.” The numbers published by Statistics Mauritius speak for themselves: in 2016, a bit more than 103,000 travellers flew from Germany to Mauritius, which represents an increase of 37.9 per cent compared to 2015.

Within the travel industry in Mauritius, the Indian market always shows an increase. In 2016, a bit more than 82,000 tourists came to the island from India, which represents a 14.6 per cent increase compared to 2015. Cassim Hansrod acknowledges that the Indian market is a “growing one.” Air India has a codeshare agreement with Air Mauritius and every week, not less than 10 flights are scheduled to four destinations in India: Bombay, Delhi, Bangalore and Chennai. What also drives Air India’s success is the number of Mauritians travelling to India; an increasing number every year. In  2016, nearly 21,000 Mauritians travelled to India, which represents about 2,000 more than in 2015.

“In 2017, Harel Mallac Aviation was rewarded by Condor for “Best Upgrade Sales Performance (long-haul) Destination” and received an “Award of Excellence” from Air India.”

According to Cassim Hansrod, over the years, Mauritians have developed a growing desire to go see elsewhere what is happening. “In the past, people would rent a bungalow for a few days; nowadays they fly to Rodrigues or Reunion Island. And if in the past they used to visit countries where they had family, today, they are more adventurous.” Their favourite destinations? India, Dubai, South Africa and the Far East. What about the prices? If on Condor, the prices are relatively the same as on another airline, the one-way ticket to India is 10 to 20 per cent cheaper on Air India, which is definitely not insignificant…