The Man Behind the Mauritius’ Internet Governance Forum: Mahen Busgopaul 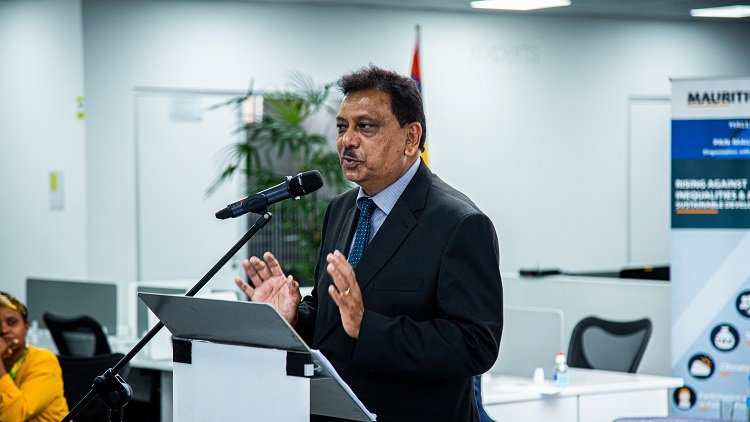 This weekend, Harel Mallac Technologies joined forces with the Halley Movement to host the fourth Mauritius Internet Governance Forum (IGF). It was a great opportunity got CONNEXION to know more about the IGF from its initiator in Mauritius, Mr. Mahen Busgopaul.

CONNEXION: This year was the fourth IGF in Mauritius: could you tell us a bit about this annual event and its objectives?

Mahen Busgopaul: The IGF is a multi-stakeholder forum launched by the United Nations to discuss public policy issues related to Internet governance, in order to foster the sustainable and secure development of the Internet. The theme of this local edition was ‘Connecting the Digital Dots in Africa’, and it has ambitious objectives, such as:

After 3 years of local editions, this one extended its coverage to other Indian Ocean countries, so, even if there were “only” some 100 participants on-site, it involved ‘online’ speakers from the neighbouring islands, and was followed in live streaming by participants in Mauritius and the region.

CONNEXION: How did the Halley Movement get involved in organising such forums?

M.B.: Our first involvement with the IGF dates to 2006, at the Global IGF in Athens. This experience resonated a lot with me, and I kept in touch with the IGF headquarters throughout the years. In 2016, their Global Secretariat invited Halley Movement to create a Mauritian edition of the IGF, which we immediately agreed to. Our inaugural IGF event was hosted at Hennessy Park Hotel in 2017 on the theme: ‘Enhancing Digital trust to Encompass Online Child Safety’. Halley Movement is regularly invited to represent Mauritius as a panel speaker to IGF meetings at regional and global levels.

CONNEXION: Could you tell us a bit more about your NGO and its activities for the benefit of Mauritian children?

M.B: We started in 1989, at a time when battered children was a growing matter of concern for people involved in social work. The NGO started a national campaign on the issue and several community-based workshops were organised around the island. I remember that the first workshop on ‘Child Battering’ in Mauritius took place at Dubreuil Community Centre. The wide press coverage and the positive response motivated us to embark on a research study on the “Causes and effects of child-battering in Mauritius”, with the support of UNICEF and The Australian High Commission. It was following this research study’s recommendations that the Government of Mauritius created the National Children’s Council in 1990.

Halley Movement followed with a survey on the “Causes of primary school failure in Mauritius”, and, with the financial support of UNICEF, set up schools for school dropouts, under the BETA programme, in 1998.

As said earlier, Halley Movement is very concerned with the safer use of the internet for Children and teenagers. In relation to this theme, we conducted a national sensitisation campaign on “Safe Surfing” in 2006. In 2012, we set up Helpline Mauritius, an online counselling service for Children, to provide them with information and counseling on topics ranging from violence at home to violence at school. As its name suggests, Helpline Mauritius provides an opportunity for children in need for protection to speak to a counselor via the Internet. It handles some 100 cases every month. CONNEXION: We were all eager to see the Children’s Bill being enacted this year, but to no avail so far. What were the contributions of the Halley Movement to this Bill, and what key measures you wish to see in it?

M.B.: Since Halley Movement has acquired the United Nations ECOSOC consultative status in 2013, we are regularly invited by the UN to submit an alternative NGO Report from Mauritius to the Human Rights Council. In my 2018 Report, I recommended the urgent adoption of the consolidated Children’s Bill and emphasized the need for a clear definition of OCSE (Online Child Sexual Exploitation). In 2019, the Human Rights Council made recommendations to the Mauritian State, to come up with the Children’s Bill, but to no avail, so far.

CONNEXION: As an NGO that has been around for over 30 years, what are your views on the evolution of the Mauritian associations?

M.B.: I might be slightly biased when responding to this question: back in the days, the people who started associations were focused on their causes and very committed to achieving their goals, with no regard for self-promotion, money or other interests. Running associations today requires more marketing, networking and PR skills, and the advancement of technology contributes to making social work increasingly competitive and difficult.

Connexion: With the drop in CSR funds and other sources of sponsorship, how should the non-profit sector plan its future to continue operate in the medium term?

M.B.: The non-profit sector needs funding to perpetuate its support to beneficiaries and progress on their projects. As you mention, the private sources of funding in Mauritius are decreasing. I believe that the State needs to recognise the positive contribution of associations in the social progress and look for new ways to support same. This being said, NGOs that have already acquired a name through their experience and work, and are recognised by international organisations, are more able to cope with the current situation.